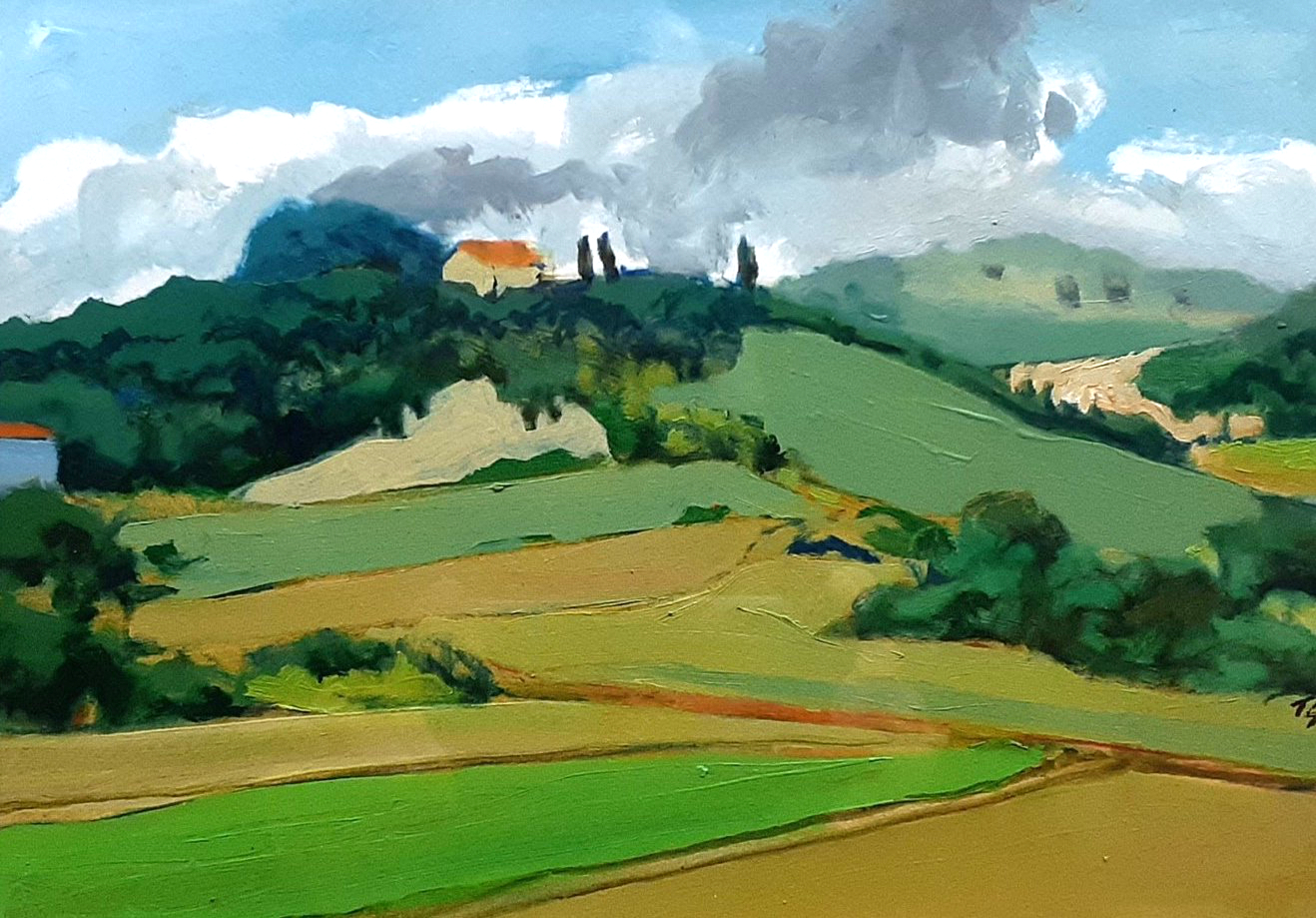 The Franklin Gallery at RiverStones Custom Framing, 33 N. Main Street in Rochester, will host an exhibit during the month of December entitled “Italia.” It features the work of Tom Glover, a local artist and framer/restorer at RiverStones.

The inspiration for this exhibit actually came from cancelled travel plans.  “I was supposed to be in Italy for my 60th birthday this year,” says Tom, “but of course Covid put an end to that. My son-in-law and my wife were planning a trip for my daughter and me as a double birthday surprise. So to fill the void that came from cancelling that trip, I decided to start working on a series of Italy paintings.

“It was great fun pulling out the many photos I had from previous trips to Italy,” he continues. “There were several from the Tuscany region and I also pulled some from the Marche Province that I had taken on a trip to Ascoli Piceno. From there it was thinking about greens and earth tones and beautiful rolling hills and towns and fields.

“There is nothing earth shattering about these paintings. I think they are just good, simple paintings of a place on this earth that I love and have been lucky enough to travel to and explore many times.  It was my goal to try to get some of the quality of the Italian landscape that I respond to into the work. The only way to know if I succeeded is for the public to come look at the work!”

Tom Glover studied with John Laurent for over two decades. He met John at the University of New Hampshire where John had taught for 30 years. Glover also studied with John Hatch, Sigmund Abeles and Conley Harris, among others. It was the connection with Laurent and his ties to early modern American painting through Marin, Hartley and Walt Kuhn that intrigued Glover. “I feel that art builds upon itself as each group of painters passes on ideas, techniques, manifestos–an ethos of aesthetic concerns,” says Glover. “Through the years an artist begins to absorb and modulate that knowledge and insight.” 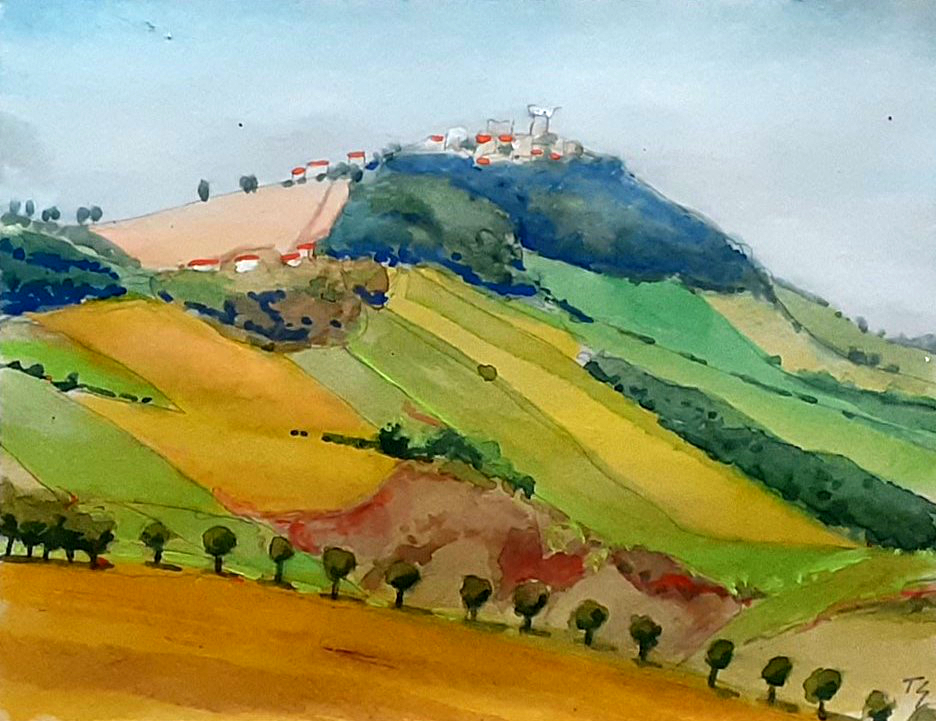 Glover’s work often involves thematic concerns and investigation. His travels have lead him to delve into the Italian landscape of Tuscany, Paris, Spain, Denmark, Costa Rica, Prince Edward Island, Nova Scotia, Arizona and New Mexico. He has done artist retreats on White Island of the Isle of Shoals; Great Spruce Head Island, where he was able to use Fairfield Porters easel to paint on the island; and Block Island where he continues to visit and work.

He has sojourned to Rome, Florence, Siena, Cinque Terre, Milan, Ascoli Piceno, London, Amsterdam and many far flung places in the states. He has been Artist in Residence on Appledore Island. He has taught at the University of New Hampshire and presently teaches at Sanctuary Arts in Eliot, Maine. He has lectured at the University of Connecticut in the Fulbright Program to foreign educators and Science Education graduate students, and he has partaken in panel discussions and lectured on his work, John Laurent and the Ogunquit School of Art. 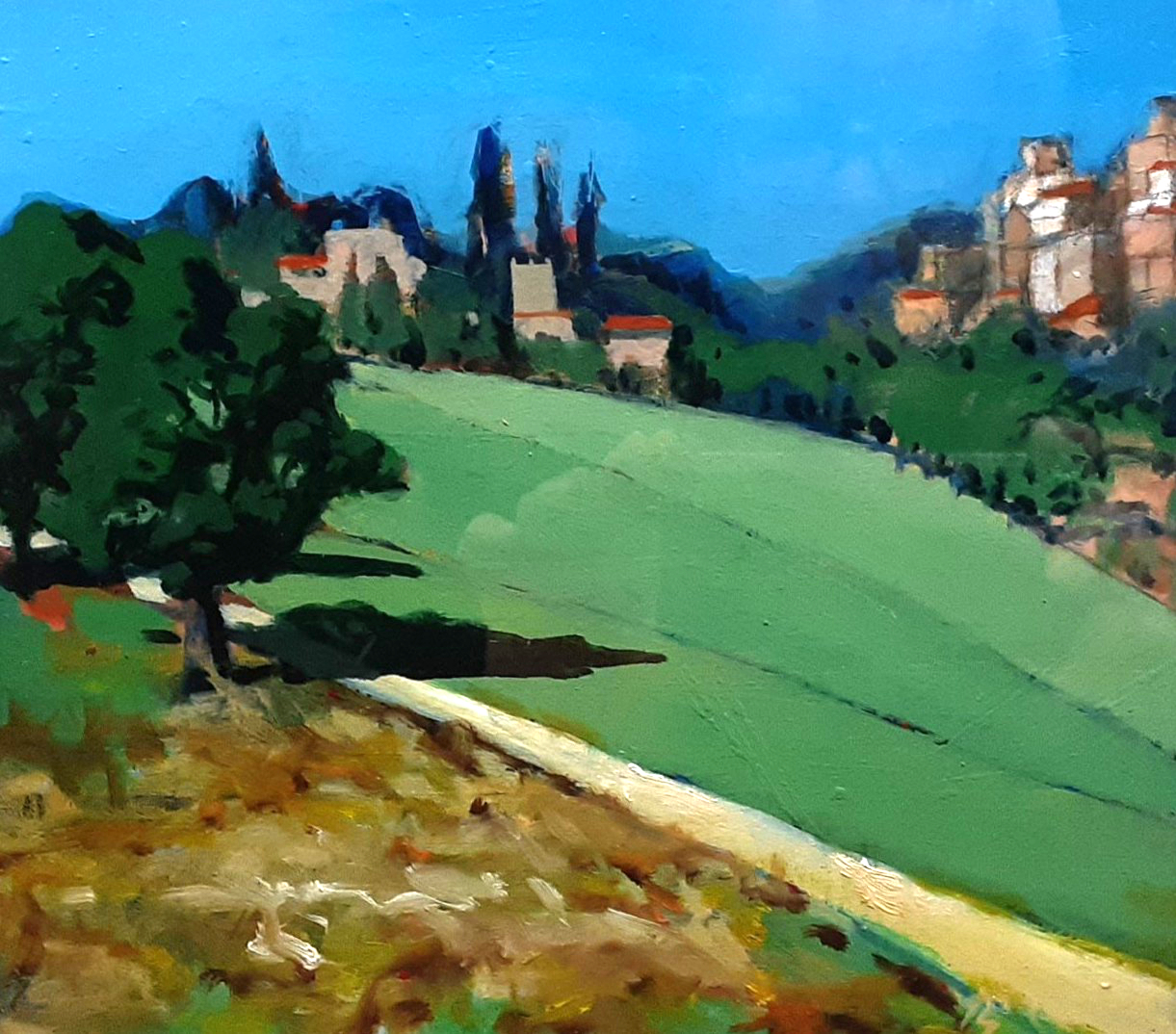 Of late, his work has focused on birds, Fenway Park, Deer Isle, Maine, and abstract combinatory paintings which he describes as, “concentrations of the piers, docks, flotsam and jetsam one finds along the coast of Maine and New Hampshire.” He also notes: “Robert Hughes once wrote that Richard Diebenkorn was the most intelligent American response to Matisse, and I find that very much the case. And so I wish to be an ‘intelligent response’ to Laurent and what he gleaned from studying with Kuhn. Of course, I am influenced by Diebenkorn and Matisse as well, both of whom I was turned onto by Laurent.”

RiverStones Custom Framing and the Franklin Gallery are open Wednesday through Friday, 11 a.m. until 5 p.m. and Saturday, 10 a.m. until 2 p.m. For information about this exhibit and other RiverStones events and services, call (603) 812-1488, or send an e-mail to riverstonescustomframing@gmail.com. You may also visit www.tpgloverart.com or on Facebook at https://www.facebook.com/tomgloverart.