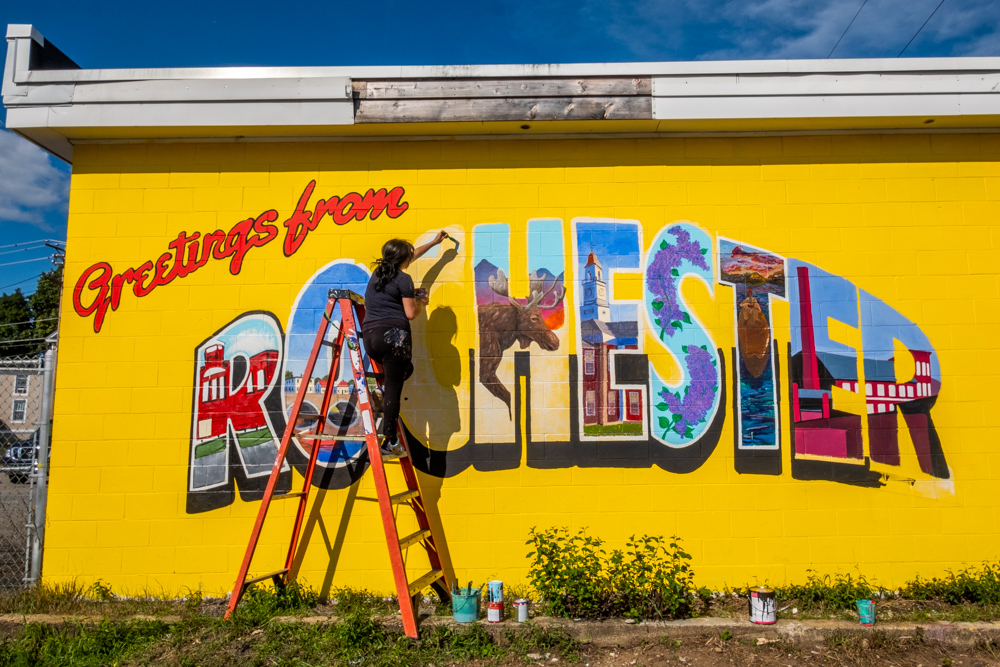 In 2020, local volunteer group ‘Making Ours Great’ commissioned Mireles to design and organize a mural for downtown Rochester. The backside of the Salvation Army was identified by the group as an opportune location since the wall had been blank for many years.

“Since my move from Texas, my most inspiring encounters have been with the grassroots art community of Rochester,” said Mireles. “I simply expressed a desire to do a mural on social media and the people of Rochester made it happen with resources and support, resulting in 3 murals.”

Mireles previously collaborated with Bernier Insurance for a mural on the former Charter Trust building, on Barker Court. She also worked with the Rochester Museum of Fine Arts to complete a mural in the halls of the James W. Foley Memorial Community Center.

“The mural [on Salvation Army] portrays the natural landscape and history of Rochester, but more importantly, it reflects the ambition, optimism, and care of the community who helped create it,” Mireles continued.

The Commission for Arts & Culture for the City of Rochester plans to recognize the completion of the mural at the upcoming Rochester Arts Awards. The ceremony is scheduled for Monday, September 27th, starting at 6pm, at The Governor’s Inn. The public is encouraged to attend.

According to Mireles, over 40 volunteers contributed to the effort, along with support from a variety of local businesses and organizations.