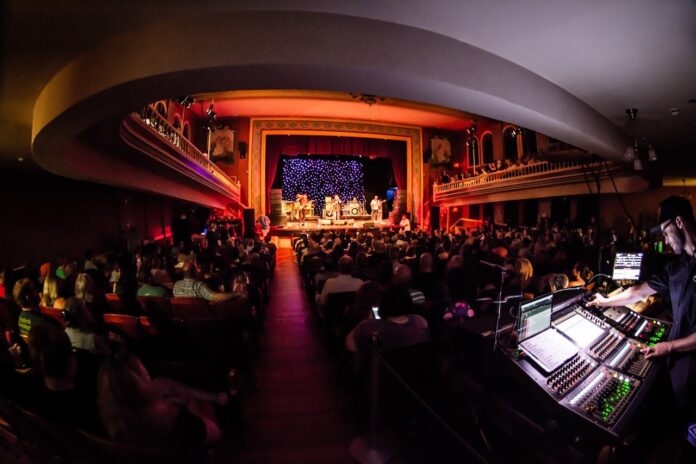 The Rochester Opera House is reviving its summer theatre series with three unique productions including Strafford Wind Symphony’s Images of America Through Music and Art; one of Broadway’s funniest smash hits, The Play That Goes Wrong; and a timeless family favorite, returning to the Rochester Opera House for the first time in 24 years, The Sound of Music.

The Strafford Wind Symphony
Saturday, June 18 (7:00 PM)
The Strafford Wind Symphony presents a kaleidoscope of music and art in combination with some of our most well-known patriotic music to celebrate America. Art in the Park, and Images of Wonder will share the stage with West Side Story, God Bless the USA, An American Spectacular, and more. This is a multimedia program that will feature great music and great artwork!

The Play that Goes Wrong
Friday, July 8 through Saturday, July 23
Welcome to the opening night of the Cornley University Drama Society’s newest production, The Murder at Haversham Manor, where things are quickly going from bad to utterly disastrous. This 1920s whodunit has everything you never wanted in a show—an unconscious leading lady, a corpse that can’t play dead, and actors who trip over everything (including their lines). Nevertheless, the accident-prone thespians battle against all odds to make it through to their final curtain call, with hilarious consequences! Part Monty Python, part Sherlock Holmes, this Olivier Award-winning comedy is a global phenomenon that’s guaranteed to leave you aching with laughter!

The Sound of Music
Friday, July 29 through Sunday, August 21
​One of the most beloved musicals of all time! Set in Austria, in 1938, an exuberant young governess brings music and joy back to a broken family, only to face danger and intrigue as the n*zis gain power.


In addition to the theatre shows, the Opera House has several one-night-only concerts planned, including WailOn, A Tribute to Waylon Jennings, Johnny Cash, and the Outlaws of Music on Friday, June 10 (8:00 PM); Hey Nineteen, a tribute to Steely Dan, on Friday, June 17 (8:00 PM); and The Uptown Boys: New York State of Mind, a show-stopping musical revue featuring the iconic songbook of Billy Joel, on Friday, October 7 (8:00 PM).

Notably, Bitter Pill, with special guests Fling, will perform on Friday, June 24 (8:00 PM). Self-described as ‘rhythm and bluegrass’, Bitter Pill is a tight-knit family, that plays a dark and anachronistic twist of folk, blues, jazz, rockabilly, and country, mixed with original spoken word as well as reading from literary classics. According to Seacoast Online, Bitter Pill “ain’t a slice of the floppy hat, fancy boots, folk boom throwback found at vacant pop-folk festivals ‘round the world. This is the real deal, punch you in the gut, and keep you coming back looking for more goods.”