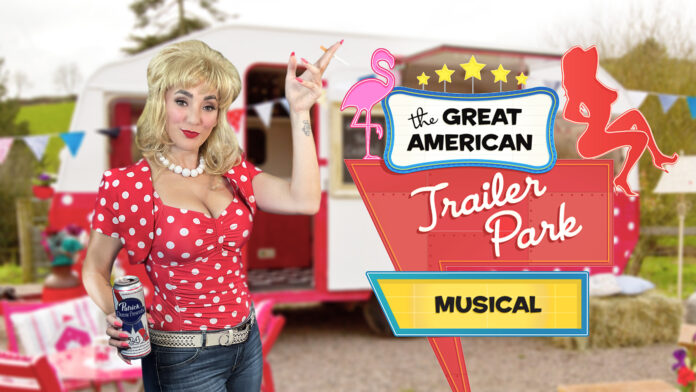 There’s a new tenant at Armadillo Acres—and she’s wreaking havoc all over Florida’s most exclusive trailer park. When Pippi, the stripper on the run, comes between the Dr. Phil–loving, agoraphobic Jeannie and her tollbooth collector husband—the storms begin to brew. Described by the NY Sun as “South Park meets Desperate Housewives,” this collaboration between composer & lyricist David Nehls and scriptwriter Betsy Kelso has its roots in their joint performances in a European tour of The Rocky Horror Show. This rip-roaring comedy boasts an international following that The New Yorker promises “is more fun than a chair-throwing episode of Jerry Springer set to music.”

Starring Elana Cantor as Pippi, Amanda Dane as Betty, Heidi Gagne as Lin, Miranda Wolf as Pickles, Miles Burns as Norbert, Jenry Towle as Jeannie, Christian Arnold as Duke, and Michelle Faria as Female Swing. This production of The Great American Trailer Park Musical is directed by Patrick Dorow of Patrick Dorow Presents with choreography by Joe Meallo, and is produced by special arrangement with Broadway Licensing (www.broadwaylicensing.com).

This raunchy, all-American musical will be filmed in front of a live audience at Rochester Opera House on Opening Night, Friday, September 16th at 7:30pm. Trailer Park will then run Thursdays through Sundays until October 2nd. The live filmed performance and its rowdy audience will stream nationwide through Broadway On Demand, powered by Stellar, starting Thursday, September 22nd.

Please note: The Great American Trailer Park Musical contains strong language, tacky outfits, big hair, adultery, 80s nostalgia, roadkill, a stripper on the run, and glittered plungers – everything a musical should be! As such, this show is RATED R for adult humor and themes.

Tickets cost $28-$34, with Senior, Military, and College Student discounts available, and may be reserved in person at Rochester Opera House, 31 Wakefield St, Rochester, NH 03867, by phone (603) 335-1992, or online at www.rochesteroperahouse.com. Streaming through Broadway On Demand, powered by Stellar, will be available from Thursday September 22nd to Sunday October 2nd. Tickets to stream are available now at www.stellartickets.com/o/patrick-dorow-presents-llc/events/trailer-park.