The Franklin Gallery to showcase works by Ross Alan Bachelder 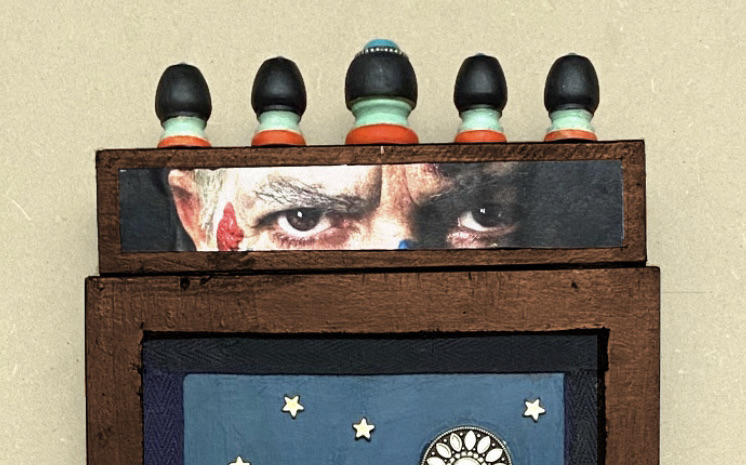 The Franklin Gallery will host an informal opening for the exhibit on Thursday, January 6 from 5:00 to 6:30 p.m. and as always, light refreshments will be offered and the public is invited and encouraged to attend.

Writer, artist, and musician Ross Bachelder has been exhibiting his unorthodox and playful drawings, paintings, found object assemblages, and photographs in galleries in northern New England for more than twenty years. He was the founder and coordinator of the KAA Seacoast Moderns (an interest group within the Kittery Art Association) and, for one year, the coordinator of AAGNE (The Abstract Artists Group of New England), an interest group within the Newburyport Art Association in Massachusetts).

Bachelder spent 12 years as manager of the frame shop at Ben Franklin Crafts in Rochester. During his time at BFC he also founded and managed the Franklin Gallery, which is now a part of RiverStones Custom Framing.

He was active for many years as a musician, performing solo recitals, playing in musical theatre, and appearing at art exhibit openings and other special events as The Flute Guy. In 2011 he traveled to New Zealand to perform in the Opening Night Ceremony for noted New Zealand artist Susan Harrison Tustain.

Bachelder has traveled frequently over the years, touring art museums and galleries, then writing and speaking publicly about his longtime immersion in the fine and performing arts. He’s toured major museums in England and Scotland, in New Zealand, in Montreal, Canada, and most recently in Reykjavik, Paris, Amsterdam, and Bruge, Belgium. Within the States, he’s toured museums and galleries in Philadelphia, Boston, Chicago, Detroit, Cincinnati, Indianapolis, New York, and many other cities, large and small.

His first book, Happy Dawg Walks The Sad Man: The Remarkably Varied Adventures of a Confirmed Arts Multiple, was published in 2016. His second book, a collection of short stories titled Revenge: Tales Best Read in the Twilight Hours, published in 2020, is chock full of in-your-face gallows humor and unexpected insights into psyches both animal and human. Both titles are available on Amazon. He’s currently at work on his third book, a novel titled Cecelia by Moonlight: The Problem with Intelligence, and a fourth book he’s calling Blue Collar Essays.

Beginning in January, Vaccines for the Heart, Comfort Food for the Soul may be seen during regular business hours: Wednesdays, Thursdays, and Fridays 11 a.m. to 5 p.m. and Saturdays 10 a.m. to 2 p.m.