Fire Department responds to apartment fire on North Main Street, cause under investigation 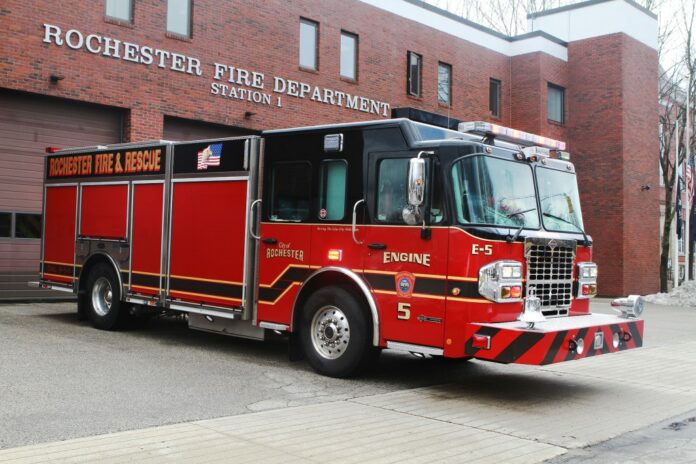 On Saturday, December 3rd at 8:23 AM, Rochester Fire Department was dispatched to 132 North Main Street for a reported building fire. Deputy Chief Jarrod Wheeler arrived on scene within minutes to find a working fire on the second floor of a three-unit apartment building.

Both first-floor apartments were under renovation and unoccupied. Wheeler was advised that there were still occupants in one of the apartments. Due to the immediate threat to the occupants, Engine-4 was ordered on their arrival to conduct an immediate rescue without the protection of a hose line.

Engine-4 performed a search of the second floor, locating two occupants. One was escorted from the building and one was carried from the building. Simultaneously, Engine-2 stretched a hose line to the fire room and extinguished the fire. Truck-6 assisted with the hose placement, ventilated the building, and checked for fire extension.

Both occupants were treated and transported by Frisbie Paramedics to Frisbie Memorial Hospital for injuries sustained in the fire. One patient was admitted to the hospital and the other was treated and later released.

According to reports, a neighbor who is acquainted with the occupants arrived to find the smoke alarm sounding with fire in a bedroom. He retrieved the fire extinguisher from the kitchen, went to the bedroom, and discharged the extinguisher on the fire, slowing its growth. He also closed the door behind him, which appears to have slowed the spread of the fire.

The building sustained fire, heat, water, and smoke damage. The cause of the fire is still under investigation by the State of NH Fire Marshals Office.