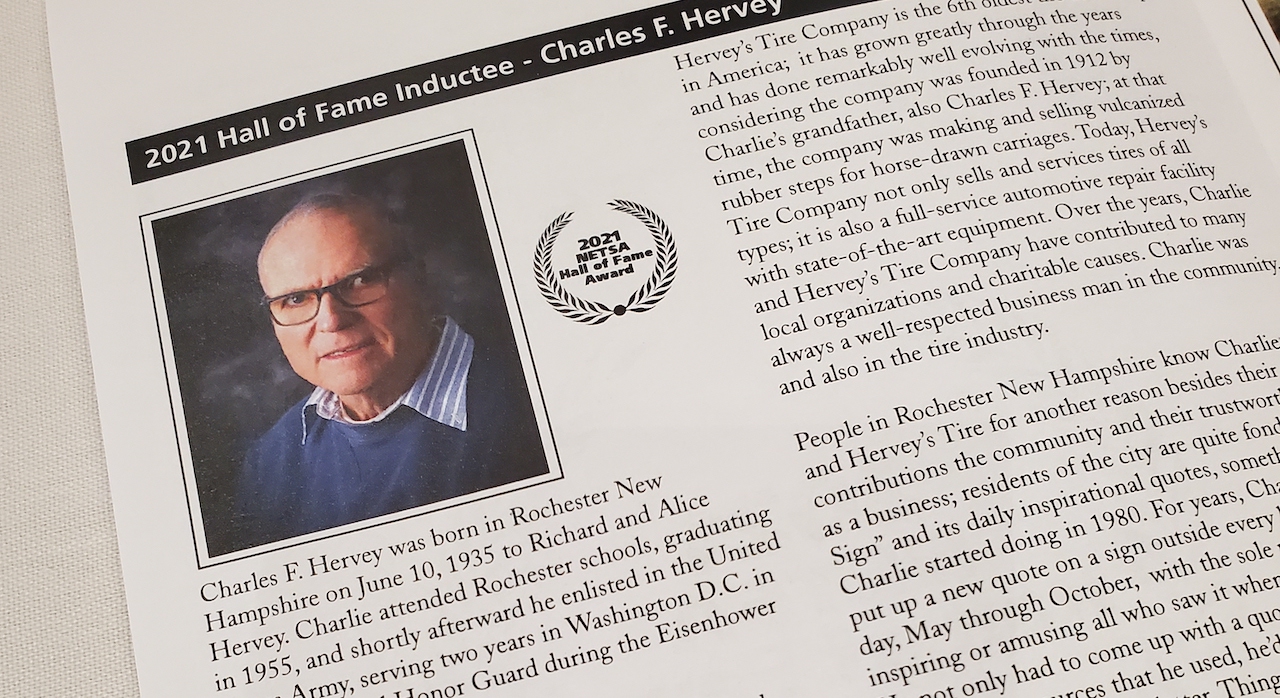 Charles F. Hervey, third-generation owner of Hervey’s Tire Company, Inc. in Rochester was inducted into the New England Tire & Service Association’s (NETSA) Hall of Fame on Saturday, August 28. The Induction Ceremony was held at the NETSA Trade Show & Convention at Mohegan Sun in Uncasville, CT. In attendance representing the Hervey family were Charlie’s sons Steve and Al, current owners of Hervey’s Tire, along with Steve’s wife Tanya Hervey, their son Evan Hervey, and Steve’s daughters Lea and Alice Hervey, along with friends. Charlie had prepared a speech which was read by Steve and included his regrets for being unable to attend the event, and he expressed what an honor it was to receive
the recognition.

Criteria to be considered a nominee for the Hall of Fame include being active in the Tire and/or Vehicle service industry in New England for at least 20 years, and the nominee must have distinguished him or herself in the industry and community as a reputable and honored leader.

Hervey’s Tire Company, Inc. was founded in 1912 by Charlie’s grandfather, Charles F. Hervey. and is the 6th oldest tire dealership in America. Charlie worked for his father Richard and Uncle Albert on and off for about 12 years after high school, and then purchased the business in 1964 from his mother Alice and his aunt Marguerite, after Dick and Al died within months of each other in 1958 and 1959.

Charlie expanded the business from one bay to 10, and from a few employees to as many as 15 employees at one time. Other involvements of Charlie’s include serving in the United States Army, two years of it in the Presidential Honor Guard under the Eisenhower administration, serving for 13 years with the Rochester Fire Department as a call man with the rank of Lieutenant, and serving for 7 years on the Rochester City Council, including as Deputy Mayor under his good friend Mayor Dick Green’s administration.

Charlie Hervey has given much to the Rochester community over the years and a business leader and with many charitable contributions, and one thing that is still going strong and is loved by the community is the Hervey’s Tire Sign, which provides thoughtful and inspirational quotes each day. Charlie started in the late 1970s rolling out a sign with letters that he had to switch out each day. Passersby became accustomed to seeing the uplifting and many times humorous daily quotes. Over the years Charlie upgraded the sign and in 2006 with the purchase of an electronic sign, he passed the torch to his daughter-in-law Tanya Hervey, who has kept up the tradition of daily quotes. The sign has gained many faithful followers over the years, including a Facebook fan page, “Hervey’s Tire Message of the Day”, on which some dedicated individual takes the time each day to go photograph the sign and post it on the page for everyone to enjoy.

Charlie has retired from the tire shop but still goes in each day, and he resides with his wife Jane. One of the things he enjoys greatly is his daily walks with son Al’s dog Max, a black Labrador Retriever who is well known at a local bank that Charlie frequents with him.