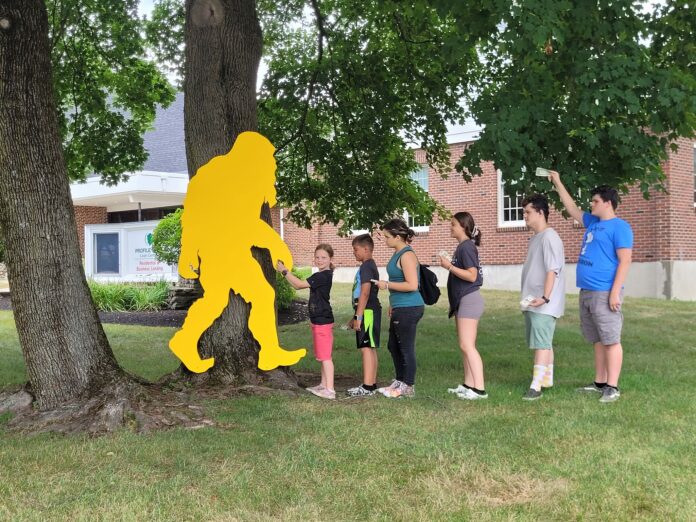 The volunteers for Rochester Main Street are pleased to announce the success of the Bigfoot scavenger hunt and raffle so far. The group plans to keep it going until the end of September.

Back in August, Rochester Main Street worked with volunteers to create 10 Bigfoot cutouts that were hidden around downtown Rochester. The goal was to hide the cutouts, create a scavenger hunt with clues to locate them, and draw names to award participants with a $25 gift certificate to the downtown business of their choice.

According to Rochester Main Street board member Matt Wyatt, the contest was meant to be a free and humorous way for families to get outside and explore, engage with local businesses, and create a draw to downtown Rochester that is fun, safe, and unique.

“We had no idea what to expect when we started this,” said board representative Matt Wyatt. “The initial [parody] article warning people about Bigfoot sightings was viewed more than 61k times on The Rochester Post. We are thrilled that so many people had a good sense of humor and enjoyed solving the clues.”

In addition to the hunt, participants were encouraged to snap photos of their experience and post them with the hashtag #RochesterBigfoot.

“It was great to see so many enjoying the activity,” said Carole Glenn, RMS board member. “We saw so many families walking downtown, solving clues, and taking funny photos. We even had a few businesses decorate their Bigfoot. It was a lot of fun and we look forward to doing it again next summer.”

Wyatt says that the entire project cost the organization less than $2k but the intrinsic result has been “well worth it”.

“It was a simple idea that turned into something bigger than we had hoped,” said Wyatt. “We have an incredible group of volunteers that care a lot about the future of downtown. Bigfoot was just one way for us to show that Rochester Main Street isn’t kidding around when it comes to our commitment to downtown vibrancy and community events.”

Although the Bigfoot scavenger hunt will conclude at the end of September, Rochester Main Street will begin announcing raffle winners on its Facebook page on September 12th.

Rochester Main Street is a volunteer-led 501c3 nonprofit organization dedicated to historic preservation and downtown revitalization and vibrancy. If you would like to volunteer or make a financial contribution, visit www.rochestermainstreet.org or call (603) 330-7195.