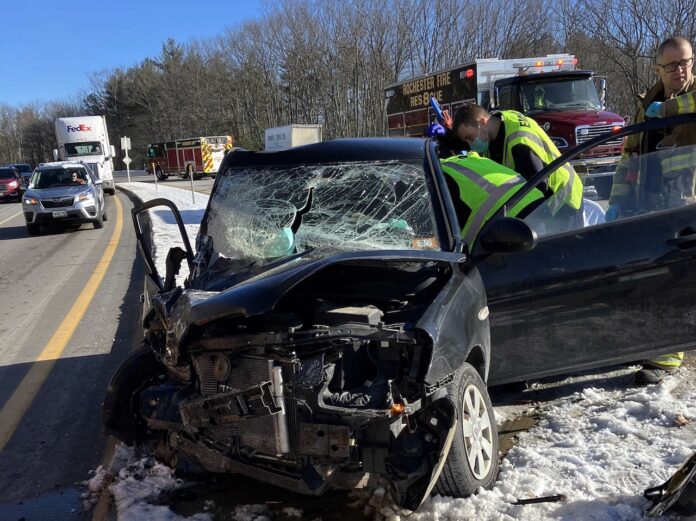 At approximately 12:15 pm on Tuesday, January 17th, emergency services responded to the Rt. 16 Spaulding Turnpike Connector, in the area of the NH DOT maintenance facility, for a two-car motor vehicle accident with a rollover and entrapment.

Emergency personnel arrived and located a maroon Toyota Tundra resting on its driver’s side and a heavily damaged black Hyundai Accent in the median. The roadway was shut down and emergency personnel extricated the two operators and sole occupants of the vehicles.

A preliminary investigation indicated that the Toyota Tundra, operated by Robert Goossens, 92, of Milton, crossed over the median and started to travel in the opposite lane of travel when it struck the oncoming Hyundai Accent, operated by Heather Garran, 34, of Rochester. Goossens was transported to Frisbie Memorial Hospital to be treated and Garran to Portsmouth Regional Hospital, both with non-life-threatening injuries.

The accident is still under investigation, however, neither speed nor alcohol appears to be a factor.